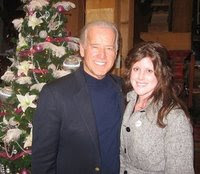 A friend of the daughter of Vice President Joseph Biden is attempting to hawk a videotape that he claims shows Ashley Biden snorting cocaine at a house party this month in Delaware.

An anonymous male “friend” of Biden took the video, said Thomas Dunlap, a lawyer representing the seller. Dunlap and another man claiming to be a lawyer showed The Post about 90 seconds of 43-minute tape, saying it was legally obtained and that Biden was aware she was being filmed. The Post refused to pay for the video.

The video shows a 20-something woman with light skin and long brown hair taking a red straw from her mouth and bending over a desk, inserting the straw into her nostril and snorting from lines of white powder.

Maybe Obama will put her on his team now?