A Norwegian artist was asked to remove his display in Ulefoss.
His intention was to promote discussion about the Koran and Islam. 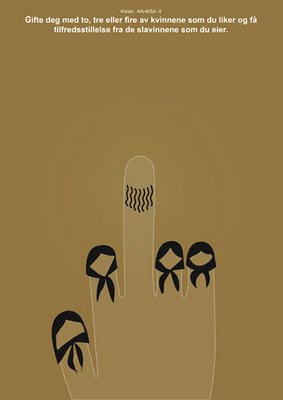 But, unfortunately the collection was not well received by the local Muslim community.

Artist Ahmed Mashhouri was asked to remove his anti-Koran exhibition in Norway after it was attacked by local Muslims.
The International Free Press Society reported:

At the Telemark county library in Ulefoss, an exhibition was promptly subjected to damage and the library asked the artists to remove it. It is now being shown in Porsgrunn.

The exhibition “Det er ikke forbudt å tenke” (”It’s not forbidden to think”) was assembled at Porsgrunn library yesterday. In a series of 12 graphic images the artist, Ahmed Mashhouri, picked out the most controversial quotes from the Quran.

“My aim is not to insult anybody and their faith. It’s to get a better understanding of the laws found in the Quran. These laws perhaps fit better in the old days, but today they just seem inhuman. I hope that my works will be a wake-up for my dear coreligionists,” he says.

Mashhouri and his wife worked for human rights in Iran. They sought asylum in Norway and now live in Skien. The images were prepared in Norway and translated to Norwegian from Persian and English.

“In discussions people love to hear that such thing aren’t found in the Quran. We want to show that they actually do,” says Mashhouri.

On December 9th, the exhibit was assembled, but not many hours passed before there was a racket and two-three Muslim women attacked his images. Afterward he was contacted by the library and asked to remove the exhibition.

“I was disappointed, because I thought I was came to a country with freedom,” says Mashhouri.

The images are posted on islamgraph.blogspot.com and Mashhouri wants people to have a discussion there.

His images were meant to promote discussion. 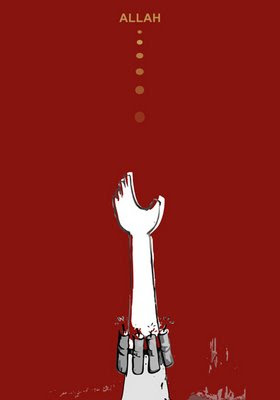 Local Muslims did not see the artistic value in his work. They attacked the display.