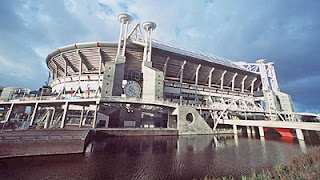 The Amsterdam Arena was one of the targets. (Sky News)

Seven people have been arrested in the Netherlands on suspicion of planning to blow up shops in Amsterdam.

Police said they had acted on a tip a day earlier from an anonymous caller in Belgium who had warned of attacks intended to cause many casualties.

The suspects, six men and a woman, are Dutch citizens of Moroccan origin.

The authorities closed a major shopping street in Amsterdam as a result. A concert by the American band The Killers was cancelled.

Police also raided a number of buildings in Amsterdam and Belgium.

Amsterdam Mayor Job Cohen said the anonymous call to police on Wednesday night “wasn’t a regular bomb warning, but a warning of a planned action”.

“Men were planning to put explosives in the shops and wanted to cause casualties in busy places,” he said.

One of those arrested was related to a suspect in the 2004 Madrid train bombings, he added.

(By the way, I just arrived in Madrid a couple hours ago.)