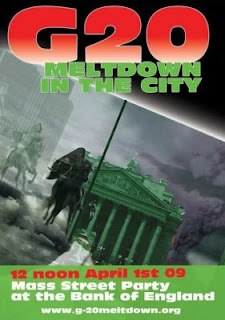 British police arrested 5 suspected terrorists who were planning attacks on the G20 meetings this week in London. Police stressed that inquiries indicated there was no religious agenda to the investigation, and that those involved were political activists.
The Daily Mail reported:

Five people suspected of terrorist offences are being questioned by police today in connection with a plot against the G20 summit.

Three men and two women have been arrested under the Terrorism Act in Plymouth over the last three days after officers uncovered a cache of weapons and suspected extremist material during a house search.

They are being questioned over claims they planned to target the meeting of the world’s most powerful political leaders in London later this week.

The five were held after officers found weapons, imitation weapons, suspicious devices and ‘material relating to political ideology’ during a house search, a police spokesman said.

Scotland Yard officers are liaising with investigators in south-west England over the suspected plot.

One source said the group are political activists who may have aspired to disrupt the G20 summit but not to injure or kill.