In his Saturday YouTube Address President Obama placed blame for the current economic crisis on the “tired old theories” of the past eight years.

Obama believes wholeheartedly that only big government spending will save our economy… Although Joe Biden is not so sure.
Here are a few lines from this week’s YouTube Address:

Another 600,000 jobs were lost in January. We’ve now lost more than 3.6 million jobs since this recession began.

In the midst of our greatest economic crisis since the Great Depression, the American people were hoping that Congress would begin to confront the great challenges we face. That was, after all, what last November’s election was all about…

Let’s be clear: We can’t expect relief from the tired old theories that, in eight short years, doubled the national debt, threw our economy into a tailspin, and led us into this mess in the first place. We can’t rely on a losing formula that offers only tax cuts as the answer to all our problems while ignoring our fundamental economic challenges – the crushing cost of health care or the inadequate state of so many schools; our addiction to foreign oil or our crumbling roads, bridges, and levees.

Obama made many of these same allegations on Thursday in his Washington Post editorial. Obama makes a number of erroneous statements in both Thursday’s editorial and today’s YouTube address.

1.) The worst economy since the Great Depression?

Kevin Williamson corrected Obama on a number of his facts at National Review after Obama made these same assertions on Thursday including his Great Depression line:

Obama’s errors begin at the beginning: “By now,” Obama opens, “it’s clear to everyone that we have inherited an economic crisis as deep and dire as any since the days of the Great Depression.” This is untrue. The early-1980s recession was worse than where we presently stand. Unemployment was nearly 11 percent; it’s about 7.5 percent now. Inflation was running at 13.5 percent in the earlier recession but is not at present much of a problem, though it may be if we push a mountain of new spending through Congress. GDP fell more sharply in the 1980s than it has in the current recession. Obama is exaggerating the problem for dramatic effect.

2.) “Tired old theories” caused the National Debt to double in the last 8 years?

Really? Those tired old theories were working pretty well for most of the last 8 years: 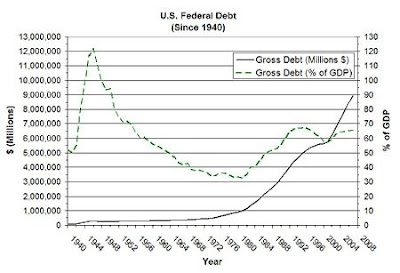 Gross Federal Debt, unadjusted for inflation as a percentage of GDP was lower during the Bush years than during much of the Clinton years – Wikipedia.

The federal budgetary situation improved in 2007 for the third consecutive year. As a percentage of GDP, the 2007 deficit was the lowest recorded in the past six years. (The budget showed surpluses from 1998 through 2001.) (Monthly Budget Review)
This was possible because of those “tired old theories of taxcuts.” 5.) Those “tired old theories of taxcuts” allowed the GDP to rebound after 9-11: 6.) It wasn’t “the tired old theories” of the last 8 years that created the current financial crisis.
As Kevin Williamson reported:

It would be nice if the media examined the new president’s statements before he burns through $1,000,000,000,000 of taxpayer money his second month on the job.