Representative Russ Carnahan (D-MO) was sued this week by a local roofing company for not paying his bill. He owes more than $17,000 to American Exteriors Inc. on a contract to replace his roof and make other repairs.
The St. Louis Post-Dispatch reported:

U.S. Rep. Russ Carnahan is being sued by a roofing company that claims the Democratic lawmaker owes more than $17,000 for unpaid repairs. 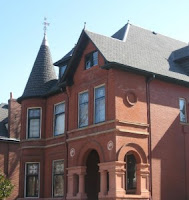 The lawsuit against Carnahan and his wife Debra, who until recently was a city judge, alleges the couple has not paid about half of a $35,800 bill to replace the roof and make other repairs on the couple’s home in the Compton Heights neighborhood.

American Exteriors Inc. of Barnhart in Jefferson County filed a lien on the Carnahan’s home in July. On Jan. 30, the company filed a lawsuit seeking $17,364 plus attorney fees.

The case has been assigned to St. Louis Circuit Court Judge Edward W. Sweeney Jr., who presides in the Carnahan Courthouse, named for the congressman’s late father.

Carnahan, the suit says, signed a detailed contract with American Exteriors that included resetting a set of copper finials on the two-and-a-half story home and painting the dormers on the house’s exterior.