UN General Assembly President: "Fidel Castro Is the Closest Thing We Have to a Saint"

Here is more proof that the UN is a joke. 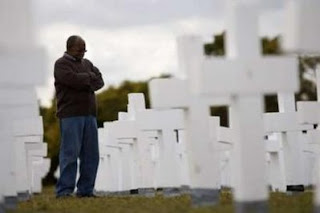 A Cuban-American visits the Cuban Memorial, a symbolic cemetery, in Tamiami Park in Miami, Florida February 6, 2009. Cuban exiles placed more than 10,000 crosses in the park to honor loved ones who died fighting Fidel Castro’s government or trying to cross into the United States. (REUTERS/Carlos Barria)

UN General Assembly President Miguel D’Escoto praised Fidel Castro on World Day of Social Justice saying the Cuban tyrant is the closest thing we have to a saint.
Granma and The Real Cuba reported:

The Nicaraguan priest said that with respect to Fidel Castro, he is more than a hero, and is the closest thing we have to a saint in our anguished world, according to a report by the Prensa Latina agency.

During an event organized by the UN Social and Economic Council’s Commission for Social Development, D’Escoto emphasized that he is indebted to Fidel Castro, as is all of humanity, as a man who has devoted his life to tirelessly practicing and promoting solidarity with the oppressed peoples of the world.

Meanwhile… Babalu has more on the Democrat’s bill to permit unrestricted travel to Cuba– Something that hasn’t been allowed in 46 years.

Fausta has more on the radical Miguel D’Escoto.