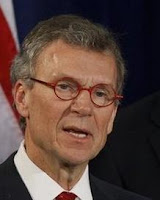 Tom Daschle has withdrawn his nomination to be Health and Human Services secretary.
That’s according to a joint White House statement from President Barack Obama and his former nominee.

Obama said Tuesday he accepted the withdrawal “with sadness and regret.”

UPDATE: The New Editor is keeping tabs on the Obama record:

At the dawn of the Obama Administration we have witnessed: four high-level appointees blow up over various issues, tax and otherwise (Richardson, Daschel, and Killefer get axed; Geitner stays); the appointment of at least 12 lobbyists to positions in the Administration — in direct contradiction of campaign promises; a pork-laden economic stimulus bill without precedent in US history; and the reversal of campaign positions concerning controversial policies like rendition.