Because liberating to 50,000,000 Muslims, toppling two of the world’s most evil regimes and offending murderous tyrants was somehow a disgrace…
Barack Obama has officially ended the “War on Terror” because it might upset Muslims. 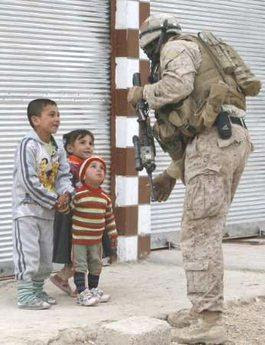 A U.S. marine providing security to international election observers greets children in Sinjar, 390 km (240 miles) northwest of Baghdad, January 31, 2009. Iraqis held their most peaceful election since the fall of Saddam Hussein on Saturday, and voting for provincial councils ended without a single major attack reported anywhere in the country. (REUTERS/Erik de Castro)

Iraq’s death toll in January was the lowest since the start of Operation Iraqi Freedom.

The war will now be called “a war on extremists who may or may not follow a particular faith” or something like that.
The AP is ecstatic:

The “War on Terror” is losing the war of words. The catchphrase burned into the American lexicon hours after the attacks of Sept. 11, 2001, is fading away, slowly if not deliberately being replaced by a new administration bent on repairing the U.S. image among Muslim nations.

Since taking office less than two weeks ago, President Barack Obama has talked broadly of the “enduring struggle against terrorism and extremism.” Another time it was an “ongoing struggle.”

He has pledged to “go after” extremists and “win this fight.” There even was an oblique reference to a “twilight struggle” as the U.S. relentlessly pursues those who threaten the country.

But only once since his Jan. 20 inauguration has Obama publicly strung those three words together into the explosive phrase that coalesced the country during its most terrifying time and eventually came to define the Bush administration.

What a far left screwball.
He does not even understand who we are fighting.