Could Dear Leader be this naive and sinister at the same time?

The Telegraph, via ROP, is reporting the Team O actually backed the “sharia law for peace” deal announced in Pakistan this week.

American officials have privately backed Pakistan’s “Sharia law for peace” deal with Taliban militants in the Swat Valley despite publicly criticising it as a “negative development”.

The deal, under which Sharia law will be introduced in the Malakhand and Kohistan districts of Pakistan’s North West Frontier Province if Taliban militants end their armed campaign in the Swat Valley, has been met with alarm by Nato chiefs and British and American officials.

Nato fears the deal would create a new “safe haven” for extremists, said a spokesman on Tuesday night, while a statement from Britain’s High Commission in Islamabad said: “Previous peace deals have not provided a comprehensive and long-term solution to Swat’s problems. We need to be confident that they will end violence, not create space for further violence.”

President Barack Obama’s special envoy to Pakistan and Afghanistan voiced the greatest concern about the strength of Taliban militants in Swat as he ended his first visit to the region since taking up his post.

“I talked to people from Swat and they were, frankly, quite terrified. Swat has really deeply affected the people of Pakistan, not just in Peshawar but in Lahore and Islamabad,” he said, while a Defence Department official described the deal as a “negative development”.

On Tuesday night however, US officials in Islamabad privately backed the deal as an attempt to drive a wedge between Swat’s Taliban, which is focused on its demand for Sharia law, and the al-Qaeda-linked Taliban led by Baitullah Mehsud, the notorious commander who controls much of North and South Waziristan and other tribal areas along the Afghan border.

While they expressed fears that the deal might yet be sabotaged by some Swat Taliban militants who support al-Qaeda, they said that if successful, the deal would break up the alliance between the two groups, which has caused alarm throughout Pakistan and in Washington.

Of the two Taliban groups, Mehsud’s is the most feared – he has been accused of masterminding the assassination of former prime minister Benazir Bhutto and trained Osama bin Laden’s son as one of his commanders – but it is the alliance with Swat Taliban leader Maulana Fazlullah which alarmed Pakistanis in the country’s main metropolitan centres.

Fazlullah, who is known as “Maulana Radio” for the illegal FM stations he uses to broadcast his latest fatwas and justify recent Taliban murders, is the son-in-law of Maulana Sufi Muhammad, the leader of Tehrik-e-Nifaz-e-Shariat-e-Mohammadi (TNSM), who once led thousands of militants to fight US forces in Afghanistan. Mr Muhammad has negotiated the Sharia law deal with local government officials and was on Tuesday night meeting Maulana Fazlullah to finalise their ceasefire.

Some senior Pakistan People’s Party leaders have privately condemned the deal as “surrender”, but government sources last night said it needed to bring peace to the valley, so that girls could return to school and business return to normal.

So how well is this sharia for peace deal working in Pakistan?

Under Obama’s watch Pakistan took steps for Sharia Law in 7 states this week.
It’s not enough… 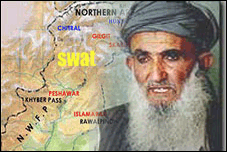 The chief of the outlawed outfit Tehrik-e-Nifaz-e-Shariat-e-Mohammadi(TNSM) Maulana Sufi Muhammad left for Swat to hold talks with Taliban in February 2008 after the Pakistani government released him from prison. He was able to convince the government to set up sharia law in the region this week.

But, the Islamists are already saying they want to spread their shariah law to the whole world.
Is this what Team Obama calls a success?