USA Today published an interactive chart on the the Obama Administration’s significant increase in spending this year.
In President Bush’s last year in office, 2008, the deficit reached $459 billion: 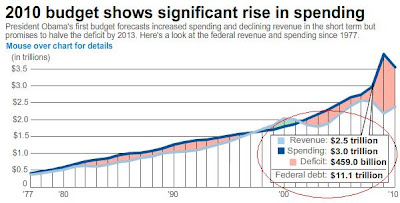 In President Obama’s first year in office the deficit is expected to reach $1.75 trillion and that is if everything goes according to the rosy scenario they are hoping for:

That is nearly 4 times as much as during President Bush’s last year in office.

It’s a good thing Team Obama believes a super large deficit is not only natural but beneficial because they sure got one.