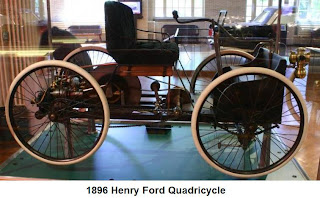 An 1896 Henry Ford Quadricycle
Thanks to the Obama Administration and Congressional Democrats, this year was the worst January performance in the stock market since 1896.

Obama and the Democrats are off to a roaring start.
They’ve already succeeded in pulling off the worst January in the stock market in 113 years.
Real Clear Markets reported:

The Bush Economy went up in smoke in September-October 2008. The financial meltdown hit Wall Street, devastating bank equities and laying waste to America’s 401-Ks. The Republican ticket, McCain-Palin, was a 50-50 bet on Sept. 15; by Oct. 15 it was a 5-1 long-shot. Voters saw the carnage: the Dow Jones Index lost 17% of its value from Sept. 2 through Nov. 3. In a flash, Americans lost years of toil, and Republicans the election. Decisively.

The election marked a turning point. Investors looked forward to the economic policies crafted by Democrats in Congress and the White House. More pointedly, they wanted decisive, well-crafted action on the banking crisis. Hence the Dow soared 6.5% Nov. 21 on news that Timothy Geithner, the highly-respected head of the New York Federal Reserve Bank, was Obama’s pick for Treasury Secretary.

Yet, from Nov. 4, 2008 through Feb. 12, 2009, the DJI overall fell 18% — a larger drop than during the Sept-Oct plunge. In January, when the Obama plan, promising far greater deficits than the two much smaller “emergency stimulus” plans signed by Pres. George W. Bush in 2008, was unveiled, the market tanked – the worst January performance in 113 years.

More pointedly, key political victories for the Team Obama spending plan have not been viewed as buying opportunities on Wall Street. A string of negative market reactions began with the December 18 announcement of a stimulus bill of $700 billion (Dow down 2.5%), continued with the January 7 announcement that the actual plan would be “on the high side” (-2.7%) and continued with last week’s 61-36 Senate vote supporting the Administration’s fiscal plan. The White House victory and the new bank bail-out plan announced the following day by Treasury Secretary Geithner were met with a 5% wipe-out in the DJI, and a decline in Treasury bond yields, indicating a “flight to quality.”

Gee, we can hardly wait for February’s results to come in.