Enough with the fearmongering… It’s a recession not a catastrophe:

Forget the hope & change, Obama is deploying fear tactics not seen since the late 1970’s when Jimmy Carter was in charge to get his $1,000,000,000,000 Spendulus Package passed through Congress.
The Washington Times reported:

From crisis to catastrophe. Off a cliff. Dark, darker, darkest. Mortal danger of absolute collapse. Armageddon.

President Obama and top Democrats on Capitol Hill are deploying these and other stark predictions of doom and gloom to push through their economic-stimulus package. In terms not heard in Washington since the late 1970s under President Jimmy Carter’s watch, the new president has sought to terrify Americans into supporting the $800 billion-plus bailout bill.

While President Bush was accused shortly after taking office in 2001 of “talking down the economy” – and for saying the economy was “slowing down” – Mr. Obama is using ever-heightening hyperbole to hammer home his message. But the strategy brings great risk for the “Yes, We Can” man, who just three weeks ago told America in his inaugural address that despite “a sapping of confidence across our land,” his election meant Americans had “chosen hope over fear.”

“Mr. Hope has to be careful not to become Dr. Doom,” said Frank Luntz, a political consultant and author of the book “Words That Work: It’s Not What You Say, It’s What People Hear.”

“The danger for him is using the Jimmy Carter malaise rhetoric, particularly for Mr. Obama, who was elected because people thought he was the solution. There’s only so much negativity they will tolerate from him before they will feel betrayed,” Mr. Luntz said.

Brad Blakeman, a senior aide to Mr. Bush from 2001 to 2004, said the new president’s language is immature.

“It’s not presidential. An American leader needs to be hopeful and optimistic – and truthful. Everything he says is parsed; everything he says is searched for deep meaning. When he goes to ‘DefCon 5’ on the economy and says that we’re on the brink of catastrophe, it’s absolutely insane.” 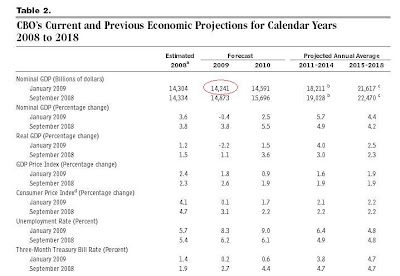 Click to Enlarge
And, Obama and Democrats want to pass a trillion dollar Spendulus bill to fix this?
Hat Tip Nano DayTrader

Maybe there is some truth to this report that the Spendulus Package is really just a plan to fund a permanent Democratic patronage system.