Everyone was getting the tingles. 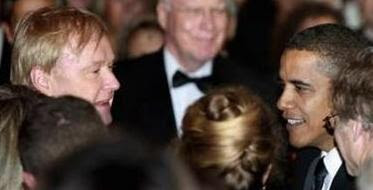 President Obama praised Abraham Lincoln for his conviction that a divided nation could be made whole at a gala Wednesday night, capping a day when congressional leaders agreed on a compromise $789 billion economic stimulus package.

He says the package is essential for pulling the U.S. out of its economic tailspin, staking his presidency on the stimulus plan, putting pressure on Congress by taking his case to the American people, arguing that it will keep the worst economic crisis since the Great Depression of the 1930s from turning into a catastrophe.

On Wednesday night, the president and first lady Michelle Obama joined a crowd of Hollywood stars and Washington heavy-hitters celebrating the $25 million renovation of Ford’s Theatre where Lincoln was assassinated.

Calling the theater “hallowed space” where Lincoln’s legacy thrives, Obama praised him for restoring a sense of unity to the country.

“For despite all that divided us — North and South, black and white — he had an unyielding belief that we were, at heart, one nation, and one people,” Obama said. “And because of Abraham Lincoln, and all who’ve carried on his work in the generations since, that is what we remain today.”