“Overall, 59% of voters say they at least somewhat approve of the President’s performance so far while 39% disapprove. Today’s results mark the first time that Obama’s overall rating has fallen below 60% as either President-elect or President.” 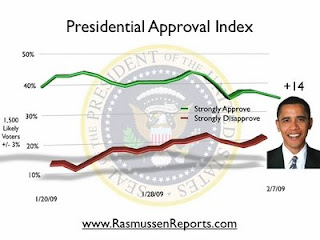 Today Obama is down another 3 points in the overall spread.

Obama was at 69 (approve) to 28 (disapprove) on January 4th.
All it took was one month, a few tax cheats, expanding abortion funding, closing Gitmo, moving the US Census to the White House, putting 25,000 US companies at risk and the most expensive piece of legislation in American history to drive his numbers southward to 59-39.
That’s all.
Hat Tip Tommy Boy

Half of Americans say the stimulus plan will probably make things worse.