President Bush went on to liberate 50,000,000 persecuted Muslims from two of the most brutal regimes in recent history. 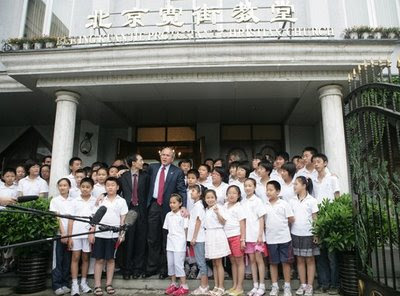 Standing with the Kuanjie Summer Vacation School Choir and Pastor Meng Maoru, President George W. Bush delivers a statement outside Beijing Kuanjie Protestant Christian Church in Beijing Sunday, Aug. 10, 2008. Said the President, “Laura and I just had the great joy and privilege of worshiping here in Beijing, China. You know, it just goes to show that God is universal, and God is love, and no state, man or woman should fear the influence of loving religion.” (White House photo by Chris Greenberg)

But, that’s all in the past now.
Yesterday, Secretary of State Hillary Clinton vowed yesterday vowed not to let human rights concerns hinder cooperation with China.
The AFP reported:

Paying her first visit to Asia as the top US diplomat, Clinton said the United States would continue to press China on long-standing US concerns over human rights such as its rule over Tibet.

“But our pressing on those issues can’t interfere on the global economic crisis, the global climate change crisis and the security crisis,” Clinton told reporters in Seoul just before leaving for Beijing.

“The United States is one of the only countries that can meaningfully stand up to China on human rights issues,” he said.

“But by commenting that human rights will not interfere with other priorities, Secretary Clinton damages future US initiatives to protect those rights in China,” he said.

UPDATE: Where’s the video of Hillary saying this? Could you imagine if Condi Rice would have said something as heartless as this? It would have been all over the news by now. Today this is barely a headline.