In the last month the Obama Administration has already:

But, this is just sick… 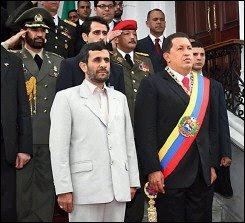 Venezuela just elected a Marxist into office for life this past week.
This week the Obama State Department broke precedent and congratulated the Marxist regime for the “democratic” elections.
IBD Editorials reported:

On the surface, Chavez’s referendum to lift all term limits — which he won 55% to 45% — had the lifelike look of demo-cracy. And if it were only about votes, it might be true.

In reality, Sunday’s referendum, Venezuela’s 14th since 1998, wasn’t about voice and choice. It was a manipulative maneuver using voters’ fear, exhaustion and capacity to be bought to make Chavez president for life in an elected dictatorship.

That’s why the Obama administration’s praise for this phony facade of democracy was dispiriting: “We congratulate the civic and participatory spirit of the millions of Venezuelans who exercised their democratic right to vote,” a State Department spokesman said, breaking past policy of not commenting on Venezuela’s referenda.

Although he noted “troubling reports of intimidation” of voters, he called the referendum “fully consistent with the democratic process” and high-mindedly urged Venezuelan officials to “focus on governing democratically.”

The trouble with these courtesies is that the “governing-democratically” horse left the barn long ago, and the current praise gives Chavez legitimacy. After being driven bonkers by the silent treatment of the Bush administration, this was what he wanted. But not if he had to govern democratically to get it…

It’s ridiculous to say Chavez’s democracy is anything like the real ones out there foolishly praising him.

For one thing, the referendum itself wasn’t legal. It followed voters’ rejection of the same questions a year ago. By law, the referendum couldn’t be held again for two years or a single constitutional period. Chavez did so anyway. Meanwhile, 18-year-olds (many of them dissidents) weren’t allowed to register to vote for the referendum, even though legally they were eligible. Why applaud this?

The broader picture is problematic, too. It doesn’t take a genius to know that a decade of political turmoil in Venezuela shows something’s wrong with its democracy. Constantly changing a constitution at the whim of a strongman doesn’t protect the rights of political minorities. Nor does it create the political stability of a real constitution. It only creates a facade.

Meanwhile, Chavez has amassed vast powers no recognizable democracy has. He controls courts, the National Assembly, the central bank, the military, all oil revenues, nearly all of the media, and electoral mechanisms. He used huge amounts of state cash to win support for this referendum, flooding airwaves with ads. Foes didn’t have access to media with national reach for airtime — and couldn’t get protest permits either.

What’s more, besides the phenomenal flood of money, Chavez created a pervasive atmosphere of menace as tiny dissident groups were firebombed, beset by red-shirted mobs, and threatened with tanks if their votes didn’t go the way Chavez wanted.

With Chavez amassing such power, does anyone believe he’ll let himself be voted out of office when his term expires in 2013? In reality, unless he’s physically thrown out, he’ll be in power for a long, long time. It won’t matter if inflation hits 60% in 2009, or the economy collapses, or the country defaults on its debts.

That’s nothing to congratulate.

My, how things have changed in the past past few weeks.

–Bush praised political dissidents.
–Obama praises brutal regimes.
Is this the change we’ve been looking for?

Paying her first visit to Asia as the top US diplomat, Clinton said the United States would continue to press China on long-standing US concerns over human rights such as its rule over Tibet.

“But our pressing on those issues can’t interfere on the global economic crisis, the global climate change crisis and the security crisis,” Clinton told reporters in Seoul just before leaving for Beijing.

UPDATE: More change you can believe in… Dan Reihl points out what Senator Hillary Clinton told President George Bush about visiting the Beijing Olympics about 6 months ago.