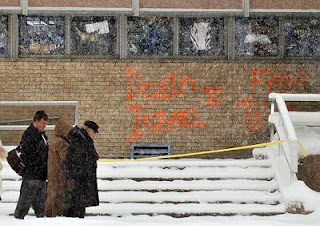 Authorities investigating vandalism at area synagogues last month descended on a Far North Side apartment today to interview a suspect and search for evidence, sources with knowledge of the investigation said.

Federal agents and Chicago police officers in the Joint Terrorism Task Force collected evidence for about nine hours at the residence in the 6000 block of North Artesian Avenue. No one had been charged by late Thursday.

Investigators were seeking evidence tied to the vandalism of several synagogues and Jewish schools in Chicago and Lincolnwood on Jan. 10 in the wake of Israeli airstrikes and troop incursions into the Gaza Strip. Windows were broken and “Death to Israel” and other anti-Israeli slogans were spray-painted on exterior walls.

Sources said a man of Jordanian descent who is suspected in the vandalism is also under investigation for sending written threats to Jewish institutions. Sources said the man lived in New York before moving to the West Rogers Park neighborhood about half a dozen years ago.

After the search had been completed and authorities had left, a resident at the apartment identified himself by name and told reporters that he was the target of the investigation. The man, 24, denied wrongdoing and said he had been singled out by authorities because he is Muslim.

When asked why authorities would target him in particular, the man said he had asked investigators the same question.

“I’m too busy studying and working to commit [hate crimes],” said the man, who indicated that he is attending school to be an engineer.

The Tribune is not naming him because he hasn’t been charged with a crime.

But the search resulted in misdemeanor charges of possession of cannabis against Tawfiq Alkaramla, 47, another resident of the apartment building, Chicago police said.