Obama’s policies were just too much to stomach.
The AP reported:

In a statement released by his office, the New Hampshire senator cites “irresolvable conflicts” on issues including the economic stimulus package.

Gregg was named the Commerce nominee a week ago after the withdrawal of former New Mexico Gov. Bill Richardson.

“I have found that on issues such as the stimulus package and the Census there are irresolvable conflicts for me.”

Good.
Judd Gregg says that he did not like that the White House stole the US Census. 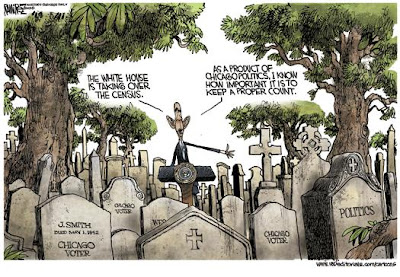 Cartoon By Michael Ramirez
Senator Judd Gregg said, “I have found that on issues such as the stimulus package and the Census there are irresolvable conflicts for me.”
Woah! And, he slams the door on the way out!
Here is the statement from Senator Gregg:

Senator Gregg Statement on His Withdrawal for Consideration of U.S. Commerce Secretary

Sen. Gregg stated, “I want to thank the President for nominating me to serve in his Cabinet as Secretary of Commerce. This was a great honor, and I had felt that I could bring some views and ideas that would assist him in governing during this difficult time. I especially admire his willingness to reach across the aisle.

“However, it has become apparent during this process that this will not work for me as I have found that on issues such as the stimulus package and the Census there are irresolvable conflicts for me. Prior to accepting this post, we had discussed these and other potential differences, but unfortunately we did not adequately focus on these concerns. We are functioning from a different set of views on many critical items of policy.

“Obviously the President requires a team that is fully supportive of all his initiatives.

“I greatly admire President Obama and know our country will benefit from his leadership, but at this time I must withdraw my name from consideration for this position.

“As we move forward, I expect there will be many issues and initiatives where I can and will work to assure the success of the President’s proposals. This will certainly be a goal of mine.

“Kathy and I also want to specifically thank Governor Lynch and Bonnie Newman for their friendship and assistance during this period. In addition we wish to thank all the people, especially in New Hampshire, who have been so kind and generous in their supportive comments.

“As a further matter of clarification, nothing about the vetting process played any role in this decision. I will continue to represent the people of New Hampshire in the United States Senate.”