In the first 100 hours of President Barack Obama’s Administration he signed legislation to close Gitmo and send the innocent turnip farmers back to their homelands. He also signed legislation to fund foreign abortions with taxpayer money one day after the historic anniversary of the Roe vs Wade decision.
Neither of these moves were very popular with the American public.

It was quite an exciting first week. 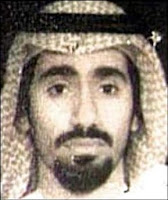 Abd al-Rahim al-Nashiri, a suspect in the USS Cole bombing who is being held at Guantanamo naval base, is pictured in this 2002 photograph. (F/HanBIdout/Reuters)

Related… Baby Born Live in Botched Abortion, Then Tossed Alive Into the Trash to Die — By the Abortion Clinic
Barack Obama supported this practice in the past.

UPDATE: Today, Obama is (Far Left) hosting 9/11 families and USS Cole families at the White House and he will tell them that he’s dropping the charges against a USS Cole suspect now held at Guantanamo and defend his decisions in a photo-op -via Move America Forward.