The hardliners have already attacked him in public with sticks. 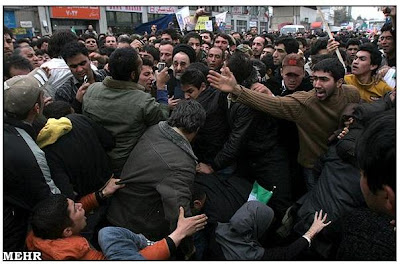 The former Iranian president was attacked by an angry mob of hardliners with sticks at a public ceremony last week after he announced his candidacy. Khatami’s bodyguards had to “take him to a building to protect him because of the presence of a large crowd”.

Political circles in Tehran reacted harshly to the publication of a front-page editorial in ‎hardliner Kayhan daily, which warned that Khatami may experience the same fate as ‎Benazir Bhutto.

Yesterday, responding to Kayhan’s editorial, which accused Khatami of participating in ‎the election to derail the process and warned about his assassination, Khatami said, ‎‎“These accusations have always backfired.”‎

Following the publication of its front-page editorial last Thursday, on Saturday, February ‎‎13, in another editorial, Hossein Shariatmadari, the Supreme Leader’s representative at ‎the newspaper, repeated the threat of physical violence against Khatami.‎