This wasn’t supposed to happen.
Didn’t they hear about our new hope and change?

Indonesians protest the upcoming trip of Hillary Clinton this week. 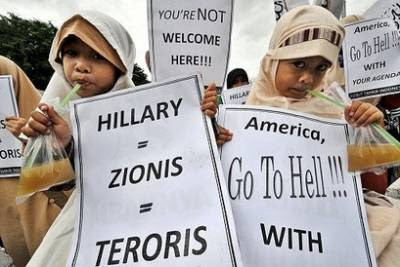 Two girls drink as they take part in an anti-Hillary Clinton visit protest in front of the US embassy in Jakarta. Secretary of State Hillary Clinton launched her Asia tour in Japan Monday calling US-Pacific ties “indispensable” for curbing problems like climate change, the global financial crisis and nuclear weapons.
(AFP/Bay Ismoyo) 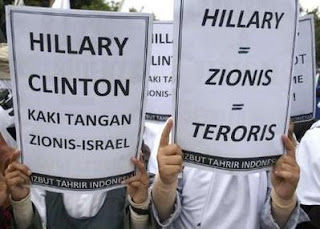 Muslim women hold placards during a protest outside the U.S. embassy in Jakarta February 16, 2009. A group of Muslim women protested against the upcoming visit by U.S. Secretary of State Hillary Clinton. The placard on the left reads, “Hillary is Israel’s accomplice and zionist”. (REUTERS/Stringer)