VIDEO PROOF the Left Is Lying About Bobby Jindal (Updated)

During Katrina, I visited Sheriff Harry Lee, a Democrat and a good friend of mine. When I walked into his makeshift office I’d never seen him so angry. He was yelling into the phone: ‘Well, I’m the Sheriff and if you don’t like it you can come and arrest me!’ I asked him: ‘Sheriff, what’s got you so mad?’ He told me that he had put out a call for volunteers to come with their boats to rescue people who were trapped on their rooftops by the floodwaters.

The boats were all lined up ready to go — when some bureaucrat showed up and told them they couldn’t go out on the water unless they had proof of insurance and registration. I told him, ‘Sheriff, that’s ridiculous.’ And before I knew it, he was yelling into the phone: ‘Congressman Jindal is here, and he says you can come and arrest him too!’ Harry just told the boaters to ignore the bureaucrats and start rescuing people.

There is a lesson in this experience: The strength of America is not found in our government. It is found in the compassionate hearts and enterprising spirit of our citizens. 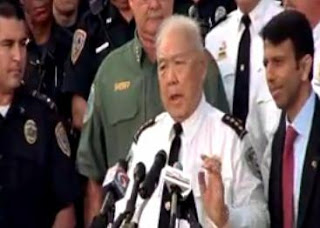 The radical left is attacking Bobby Jindal over his story regarding Hurricane Katrina and Sheriff Harry Lee.

The people from Louisiana has heard this story a million times.

The key point to be killed is the radical Left, with Keith Olbermann, claims the story is false because Jindal was not on the ground in New Orleans during the Katrina mess.
** NOT TRUE **
In fact, Jindal was the *only* elected official who was on the ground.

Here is the most important information:

In this post- RedState refutes the “75-mile” meme Olbermann, TPM, and Kos are pushing.
This quote here kills the liberal lie that Jindal was hiding in Baton Rouge:

“During Hurricane Katrina, I and former Sheriff Harry Lee were with (then Congressman) Bobby Jindal more than anybody else from the federal government. He didn’t wait for cameras or permission — he was boots on the ground, and anyone that disputes that obviously wasn’t in Louisiana.” — Jefferson Parish Sheriff Newell Normand, Democrat

Finally there’s video proof of Sheriff Lee recounting that Jindal was on the ground right after the hurricane and did help him unlike the rest of Louisiana’s elected officials:

That about says it, I’d say.

Now the lefties are just moving the goal posts and saying Bobby was not in New Orleans “during Katrina” because he was not there while the hurricane was blowing over the city — never mind that he showed up the next day as the levees were collapsing.
Puh-lease.

Don’t allow the left to slander Bobby Jindal.
Help get the truth out!

UPDATE: Bobby Jindal fights back against slander.
Including another first hand account:

Col. John Fortunato, spokesman for the Sheriff’s Office, said Jindal appeared at the sheriff’s offices on the east and west banks several times in the days after the storm. The boat rescue holdup by federal response officials did occur initially as citizens brought their watercraft to a staging area in Jefferson Parish, he said. But the problem was resolved and the great majority of boats were deployed to the flooded areas of New Orleans later that day.

Teepell, who after the storm drove with Jindal to visit various sheriffs’ offices in his district, said he recalled being in Lee’s office in west Jefferson on several occasions in the days after the storm. Teepell said he remembers the phone conversation but did not know who was talking to Lee.

Lee was recounting the boat rescue story to the caller on the line, Teepell said. The phone call was not taking place while the boats were attempting the rescue operation, but some days afterward, Teepell said.