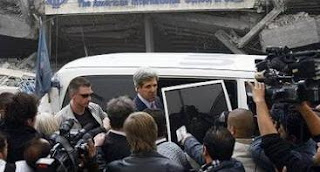 Journalists surround US Senator John Kerry(C) as he visits the destroyed American International School in Beit Lahia in the northern Gaza Strip. (AFP)

Hamas slipped a letter to John Kerry while he was in Gaza yesterday.
It is the first letter to Obama from the terror group since he moved into the White House.
Haaretz reported:

A Hamas adviser reached out to United States President Barack Obama in a personal letter that was passed from a top United Nations official to a high-ranking U.S. senator during a rare visit to the Gaza Strip, officials said on Friday.

The coastal territory’s Hamas rulers disavowed the letter, which the U.S. consulate in Jerusalem will send on to Washington for review.

It was the first known overture of its kind since Obama became president last month, but it is unclear whether it will reach him. A U.S. boycott of Hamas has not changed under the new administration.

UPDATE: US officials say they are furious with the UN for its role in Hamas’ attempt to enlist U.S. Sen John Kerry to transfer a letter from the Palestinian militant group to President Obama.
Whatever.