In May 2006, Saudi Arabia announced that 56 of the top 58 most wanted al-Qaeda linked terrorists in the Kingdom had been killed or captured. 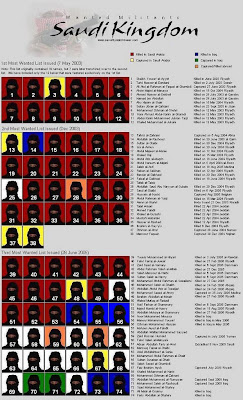 But, that was before they started dumping Gitmo detainees back on the streets.
The AP reported:

The Saudi government acknowledged Wednesday that 11 men on the country’s most wanted list are former Guantanamo prisoners who went through rehabilitation, raising doubts about a program intended to counter extremist religious ideology.

President Barack Obama signed an executive order closing down the prison in Cuba on Jan. 22 — his second day in office — leaving nations scrambling over what to do with a potential flood of released detainees.

Some 133 of Guantanamo’s over 700 inmates were Saudi, according to Interior Ministry spokesman Gen. Mansour al-Turki, and 117 have returned to Saudi Arabia and been through rehabilitation programs.

“Besides the 11 people (on the list) who came from Guantanamo, there are still 106 people who have gone through this rehabilitation program and are doing okay,” he told The Associated Press.

With a majority of the 9/11 hijackers from Saudi Arabia and hundreds of youths streaming into Iraq to join the insurgents, there has been a concerted government effort to counter with deprogramming sessions involving clerics, psychologists and sociologists.

It is in large part due to Saudi assurances of the effectiveness of these programs that most Saudis have been released from Guantanamo. Only 13 remain jailed there, according to al-Turki.

Since leaving Club Gitmo several of the graduates took part in attacks on the Russian pipeline, the Russian city of Nalchik, on Pakistani forces, in Morocco, on the US Embassy in Yemen, etc.
At least 61 Gitmo grads have returned to terror.

Two Gitmo detainees rehabilitated in Saudi Arabia rejoined the jihad and recently made a movie.

The Long War Journal has updated photos of the most wanted Saudi terrorists.