Democrats froze Republicans out of the “stimulus” conference negotiations today. 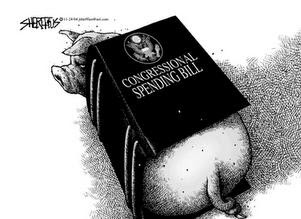 Click here to find out who your elected officials are, and write them about this bill.

Rep. Tom Price (R-GA) discusses the Spendulus Deal struck between Congressional Democrats and the White House without Republican input or public oversight.
He chose to make his statement outside of Speaker Pelosi’s closed door since Democrats had shut Republicans out of the discussions today:

Republican Study Committee Chairman Tom Price (R-GA) issued the following statement amid reports that congressional Democrats and the White House have reached a $789.5 billion deal on their spending package. The negotiations took place behind closed doors, with no public oversight and absolutely no Republican input.

“Once again both Republicans and the American public have been shut out as congressional Democrats and the White House have struck a backroom deal on the so-called stimulus bill,” said Chairman Price. “This bill is the product of political dealing among a group of political insiders. As a result, the final product represents everything that the American people detest about Washington and everything special interests adore.

“Instead of working with all sides to seek solutions, Democrats have refused to heed Republican input. And instead of holding themselves accountable to taxpayers, Democrats dealt with the White House behind closed doors. The product that emerged from the proverbial smoke-filled room might reflect the will of the Democrat majority, but it falls well short of representing the desires of the American public.”

Oh, and get this… Charlie Rangel not only survived a vote to remove him from the chairmanship of the House Ways and Means Committee, but he was selected by the Democratic leadership to participate in the negotiations over reconciling the House and Senate porkfest bills.
They’re just like hogs at the trough.

Still More… Reason Online has 800 billion reasons to be worried.