A Nobel Peace Prize, an Oscar, and now a Grammy for junk science…
Not bad. 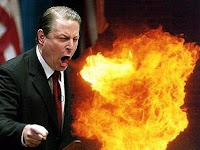 It is not clear if Al Gore told students on the recording, “Don’t listen to your parents,” or if he left that suggestion off of the tape.

An Inconvenient Truth by Al Gore has won the 2009 GRAMMY Award for Best Spoken Word Album.

An Inconvenient Truth is read by Beau Bridges, Cynthia Nixon and Blair Underwood.

With wit, smarts and hope, AN INCONVENIENT TRUTH ultimately brings home Gore’s persuasive argument that we can no longer afford to view global warming as a political issue – rather, it is the biggest moral challenges facing our global civilization.

Despite the global freeze this year and the possibility that this may be the coldest year in recorded history, Al Gore still insists that the North Pole will completely disappear in 4 years.