Breitbart reported that the funds for the bank programs may reach $2 trillion!
Boy, they must think our grand kids are rich. 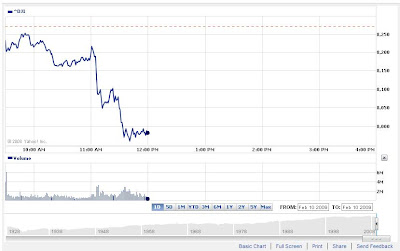 The Dow reacted immediately to the latest Democratic bailout news.

It didn’t get any better as the news sunk in.

Geithner said that Americans have lost faith in financial institutions.
It probably didn’t help that a tax cheat was just put in charge of the IRS.
Reuters reported:

“Instead of catalyzing recovery, the financial system is working against recovery, and that’s the dangerous dynamic we need to change.

“It is essential for every American to understand that the battle for economic recovery must be fought on two fronts. We have to both jump-start job creation and private investment, and we must get credit flowing again to businesses and families.

“That vote gave the Administration the authority to act to pull the financial system back from the edge of catastrophic failure.

“The actions we took were absolutely essential, but they were inadequate.

“The force of government support was not comprehensive or quick enough to withstand the deepening pressure brought on by the financial crisis.

“The spectacle of huge amounts of taxpayer money being provided to the same institutions that help caused the crisis, with limited transparency and oversight, added to public distrust.

“Our challenge is much greater today because the American people have lost faith in the leaders of our financial institutions, and are skeptical that their government has — to this point — used taxpayers’ money in ways that will benefit them.

UPDATE: The senate passed the Generational Theft Act today.
The vote was 61-37.

More… Ace is stunned by the remarkable restraint the democrats have shown thus far this year:

Almost Ten Trillion in Bailouts, Spending, Guarantees, and “Stimulus” So Far, And More to Come

Drudge is red-lining this Bloomberg piece.

Obama and the Democrats claim we need to take “dramatic steps” — I’m sorry, was 8.7 trillion not dramatic enough for you?