In his first hundred hours in office President Barack Obama expanded taxpayer funding for abortions in foreign countries. He did this the day after the anniversary of Roe v Wade.

In his second week in office he announced he will sign an executive order overturning President Bush’s embryonic stem cell research policy. That way taxpayers can fund killing embryos along with foreign abortions.

This is the same man who supported infanticide.

But, this didn’t stop TIME from wondering if the most radical pro-abortion president ever is really pro-life: 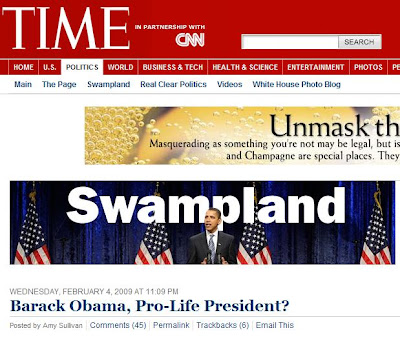 The reason they ask this is because he says he is for reducing abortions.
That doesn’t make him pro-life. That just means he may have a conscience.
Only a complete heathen would want more abortions.