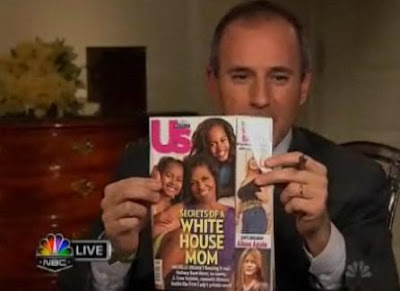 LAUER: And here’s a great picture —

LAUER: — of — of you and — and Michelle and — and your daughters. Now, the — the reason I bring this up I think is funny. It’s a great picture.

LAUER: But I wanna show you the cover. Look what they did. They — they took you off the cover.

LAUER: They took you out of it.

LAUER: You got replaced by Jessica Simpson.

LAUER: What would you like to say to the tens of millions of people who are watching this game today?

Oh, and did anyone catch this line from Obama: “People think I’m cool.”
Some people do, Mr. President.
Others may think you’re a bore.

UPDATE: The Politico is defending the president for joking about Jessica Simpson’s weight problem.
Figures.