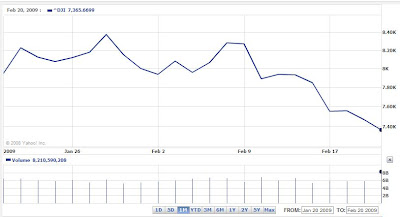 The stock market is off nearly 10% from the day before the inauguration.

And, here’s the latest chilling news from the White House.
Team “O” plans on raising taxes on already strapped American businesses and the “rich.” And, he plans on expanding health care… during a recession.
The Washington Post reported:

President Obama is putting the finishing touches on an ambitious first budget that seeks to cut the federal deficit in half over the next four years, primarily by raising taxes on business and the wealthy and by slashing spending on the wars in Iraq and Afghanistan, administration officials said.

In addition to tackling a deficit swollen by the $787 billion stimulus package and other efforts to ease the nation’s economic crisis, the budget blueprint will press aggressively for progress on the domestic agenda Obama outlined during the presidential campaign. This would include key changes to environmental policies and a major expansion of health coverage that Obama hopes to enact later this year.

The stock market ought to love that.
Obama must really want to kill off the remaining American businesses.
His second month is shaping up to be another thriller already.