This article was published in Geostrategy-Direct , an open source intelligence (OSINT) newsletter that has a good track record. 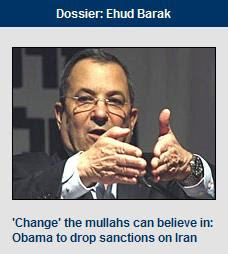 The report would probably seem preposterous if it weren’t for the fact that Team Obama already waived sanctions on Syria and is considering opening travel to Cuba.
It’s like watching Carter on Speed.

This latest news comes from the February 18, 2009 edition of Geostrategy Direct (subscribers only):

DOSSIER: Ehud Barak
‘Change’ the mullahs can believe in: Obama to drop sanctions on Iran

TEL AVIV — Israelis may have gone to the polls hoping for “Change” but the status quo is all any of the candidates could look forward to whatever the outcome. Defense Minister Ehud Barack, has already glimpsed the future and has warned about what it holds.

Meanwhile, the status quo means continued rocket and missile attacks while international aid pours into the Gaza Strip and bolsters a regime run by Hamas, which is still considered by the United States to be a terrorist organization.

But “Change” is taking place, Barak has intimated, originating not in the Mideast but in Washington, D.C. in the form of a U.S. reconciliation with Iran.

Such a process could result in U.S. acceptance of Teheran’s nuclear weapons program and the downplaying of its threats against Israel.

Just as Barack Obama entered office facing a massive economic crisis beyond the scope of his experience, likewise the new Israeli leader will have to make or delay making difficult strategic decisions from the minute he or she enters office.

Barak has already signaled what the new government can expect, officials here said.

The United States has abandoned its policy of sanctioning companies that aid Iran’s nuclear and missile program, they said.

The officials said the new Obama administration of has decided to end sanctions against Iranian government agencies or companies that aid Teheran’s missile and nuclear program. The officials said Israel has been informed of the new U.S. policy.

“We were told that sanctions do not help the new U.S. policy of dialogue with Iran,” an official said.

Barak confirmed the new U.S. policy. In an address to the Herzliya Conference on Feb. 3, Barak said Washington did not say whether it would resume sanctions against Iran.

“We must arrive at a strategic understanding with the United States over Iran’s military nuclear program and ensure that even if at this time they opt for the diplomatic option, it will only last a short time before harsh and necessary sanctions are imposed,” Barak said.

Obama decided to end sanctions against Iran after determining that the U.S. measures had failed to block Teheran’s missile or nuclear weapons program, officials said. Under the administration of former President George Bush, the United States accelerated sanctions on Iran in 2008.

In his address, the Israeli defense minister indicated that Obama had forged an entirely new approach toward Iran. He said the Israeli government has sought a briefing from the new U.S. administration.

“The administration has abandoned sanctions entirely,” the U.S. source said. “It is a completely new ballgame.”

Similarly, Obama has decided on a new U.S. ambassador to Syria and is expected to lift sanctions against a nation charged with aiding Al Qaida in Iraq and secretly building a nuclear reactor with North Korean assistance.
Diplomatic sources said Obama, in consultation with Secretary of State Hillary Clinton, has asked Frederic Hof to become the first U.S. ambassador to Damascus since 2005. The sources said Hof, a member of the National Advisory Committee of the Middle East Policy Council, agreed to take the post.

The sources said the Obama administration was expected to suspend U.S. sanctions on Syria’s military and energy programs.

They said Hof would be authorized to facilitate an expansion of U.S. relations with Syria, which deteriorated under President George Bush.

In 2005, the United States withdrew its ambassador to Damascus in wake of the assassination of former Lebanese Prime Minister Rafik Hariri. Syria was blamed for the car bombing in Beirut in which Hariri and many of his bodyguards were killed.

The sources said Obama sent emissaries to Syria in September 2008 and pledged that if elected he would reconcile with the regime of President Bashar Assad. After his election victory, they said, Obama sent another message that promised to appoint an ambassador within the first weeks of his administration.