Bobby Jindal Rocks: "We Believe Americans Can Do Anything"

“We Believe Americans Can Do Anything” 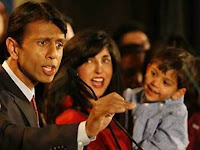 Jindal’s message of individual freedom, economic freedom, personal responsibility and hope was a stark contrast from the unrealistic garbage that we heard from the socialist Messiah before him.

Democrats place their hope in government.
We place our hope in you the American people.

“We Believe Americans Can Do Anything.”
This was a terrific speech.
Jindal has a tremendous amount of charisma.

Here is the full transcript of the speech.

Tonight, we witnessed a great moment in the history of our Republic. In the very chamber where Congress once voted to abolish slavery, our first African-American President stepped forward to address the state of our union. With his speech tonight, the President completed a redemptive journey that took our nation from Independence Hall . to Gettysburg . to the lunch counter . and now, finally, the Oval Office.

Regardless of party, all Americans are moved by the President’s personal story — the son of an American mother and a Kenyan father, who grew up to become leader of the free world. Like the President’s father, my parents came to this country from a distant land. When they arrived in Baton Rouge, my mother was already 4 ½ months pregnant. I was what folks in the insurance industry now call a ‘pre-existing condition.’

To find work, my dad picked up the yellow pages and started calling local businesses. Even after landing a job, he could still not afford to pay for my delivery — so he worked out an installment plan with the doctor. Fortunately for me, he never missed a payment.

As I grew up, my mom and dad taught me the values that attracted them to this country — and they instilled in me an immigrant’s wonder at the greatness of America. As a child, I remember going to the grocery store with my dad. Growing up in India, he had seen extreme poverty. And as we walked through the aisles, looking at the endless variety on the shelves, he would tell me: ‘Bobby, Americans can do anything.’

I still believe that to this day. Americans can do anything. When we pull together, there is no challenge we cannot overcome.

As the President made clear this evening, we are now in a time of challenge. Many of you listening tonight have lost jobs. Others have seen your college and retirement savings dwindle. Many of….

…Let me tell you a story.

During Katrina, I visited Sheriff Harry Lee, a Democrat and a good friend of mine. When I walked into his makeshift office I’d never seen him so angry. He was yelling into the phone: ‘Well, I’m the Sheriff and if you don’t like it you can come and arrest me!’ I asked him: ‘Sheriff, what’s got you so mad?’ He told me that he had put out a call for volunteers to come with their boats to rescue people who were trapped on their rooftops by the floodwaters.

The boats were all lined up ready to go — when some bureaucrat showed up and told them they couldn’t go out on the water unless they had proof of insurance and registration. I told him, ‘Sheriff, that’s ridiculous.’ And before I knew it, he was yelling into the phone: ‘Congressman Jindal is here, and he says you can come and arrest him too!’ Harry just told the boaters to ignore the bureaucrats and start rescuing people.

There is a lesson in this experience: The strength of America is not found in our government. It is found in the compassionate hearts and enterprising spirit of our citizens.

We are grateful for the support we have received from across the nation for the ongoing recovery efforts. This spirit got Louisiana through the hurricanes — and this spirit will get our nation through the storms we face today.

To solve our current problems, Washington must lead. But the way to lead is not to raise taxes and put more money and power in hands of Washington politicians. The way to lead is by empowering you — the American people. Because we believe that Americans can do anything.

That is why Republicans put forward plans to create jobs by lowering income tax rates for working families, cutting taxes for small businesses, strengthening incentives for businesses to invest in new equipment and hire new workers, and stabilizing home values by creating a new tax credit for home-buyers.

These plans would cost less and create more jobs.

But Democratic leaders in Congress rejected this approach. Instead of trusting us to make wise decisions with our own money, they passed the largest government spending bill in history — with a price tag of more than $1 trillion with interest.

While some of the projects in the bill make sense, their legislation is larded with wasteful spending. It includes $300 million to buy new cars for the government, $8 billion for high-speed rail projects, such as a ‘magnetic levitation’ line from Las Vegas to Disneyland, and $140 million for something called ‘volcano monitoring.’ Instead of monitoring volcanoes, what Congress should be monitoring is the eruption of spending in Washington, DC.

Democratic leaders say their legislation will grow the economy. What it will do is grow the government, increase our taxes down the line and saddle future generations with debt.

Who among us would ask our children for a loan, so we could spend money we do not have, on things we do not need? That is precisely what the Democrats in Congress just did. It’s irresponsible. And it’s no way to strengthen our economy, create jobs or build a prosperous future for our children.

In Louisiana, we took a different approach. Since I became governor, we cut more than 250 earmarks from our state budget. And to create jobs for our citizens, we cut taxes six times — including the largest income tax cut in the history of our state.

We passed those tax cuts with bipartisan majorities. Republicans and Democrats put aside their differences, and worked together to make sure our people could keep more of what they earn. If it can be done in Baton Rouge, surely it can be done in Washington, DC.

To strengthen our economy, we need urgent action to keep energy prices down. All of us remember what it felt like to pay $4 at the pump — and unless we act now, those prices will return. To stop that from happening, we need to increase conservation, increase energy efficiency, increase the use of alternative and renewable fuels, increase our use of nuclear power, and increase drilling for oil and gas here at home.

We believe that Americans can do anything — and if we unleash the innovative spirit of our citizens, we can achieve energy independence.

To strengthen our economy, we also need to address the crisis in health care. Republicans believe in a simple principle: No American should have to worry about losing their health coverage – period.

nd for universal access to affordable health care coverage. We oppose universal government-run health care. Health care decisions should be made by doctors and patients — not by government bureaucrats. We believe Americans can do anything — and if we put aside partisan politics and work together, we can make our system of private medicine affordable and accessible for every one of our citizens.

To strengthen our economy, we also need to make sure every child in America gets the best possible education. After Katrina, we reinvented the New Orleans school system — opening dozens of new charter schools, and creating a new scholarship program that is giving parents the chance to send their children to private or parochial schools of their choice. We believe that, with the proper education, the children of America can do anything. And it should not take a devastating storm to bring this kind of innovation to education in our country.

To strengthen our economy, we must promote confidence in America by ensuring ours is the most ethical and transparent system in the world. In my home state, there used to be saying: At any given time, half of Louisiana is under water — and the other half is under indictment.

No one says that anymore. Last year, we passed some of the strongest ethics laws in the nation — and today, Louisiana has turned her back on the corruption of the past. We need to bring transparency to Washington, DC — so we can rid our Capitol of corruption and ensure we never see the passage of another trillion dollar spending bill that Congress has not even read and the American people haven’t even seen.

As we take these steps, we must remember for all our troubles at home, dangerous enemies still seek our destruction. Now is no time to dismantle the defenses that have protected this country for hundreds of years, or make deep cuts in funding for our troops.

America’s fighting men and women can do anything. And if we give them the resources they need, they will stay on the offensive, defeat our enemies and protect us from harm.

In all these areas, Republicans want to work with President Obama. We appreciate his message of hope — but sometimes it seems we look for hope in different places. Democratic leaders in Washington place their hope in the federal government. We place our hope in you — the American people.

In recent years, these distinctions in philosophy became less clear — because our party got away from its principles. You elected Republicans to champion limited government, fiscal discipline, and personal responsibility. Instead, Republicans went along with earmarks and big government spending in Washington. Republicans lost your trust — and rightly so.

A few weeks ago, the President warned that our nation is facing a crisis that he said ‘we may not be able to reverse.’ Our troubles are real, to be sure. But don’t let anyone tell you that we cannot recover — or that America’s best days are behind her.

This is the nation that cast off the scourge of slavery, overcame the Great Depression, prevailed in two World Wars, won the struggle for civil rights, defeated the Soviet menace, and responded with determined courage to the attacks of September 11, 2001.

We can have confidence in our future — because, amid today’s challenges, we also count many blessings: We have the most innovative citizens –the most abundant resources — the most resilient economy — the most powerful military — and the freest political system in the history of the world.

My fellow citizens, never forget: We are Americans. And like my Dad said years ago, Americans can do anything.

Thank you for listening. God bless you. And God bless America.”