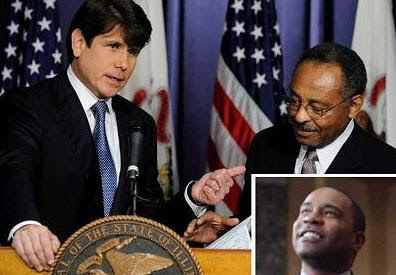 Blago gave Roland Burris’ son a top job in the Illinois housing authority three weeks after a mortgage company filed a foreclosure suit on his South Side home.
The Chicago Sun-Times reported:

The son of embattled Sen. Roland Burris is a federal tax deadbeat who landed a $75,000-a-year state job under former Gov. Rod Blagojevich five months ago, the Chicago Sun-Times has learned.

Blagojevich’s administration hired Roland W. Burris II as a senior counsel for the state’s housing authority Sept. 10 — about six weeks after the Internal Revenue Service slapped a $34,163 tax lien on Burris II and three weeks after a mortgage company filed a foreclosure suit on his South Side house.

A spokeswoman for the Illinois Housing Development Authority indicated Wednesday there was nothing improper about Burris II’s employment by the agency, whose mission includes overseeing mortgage programs for low-income home buyers and anti-foreclosure initiatives…

“Roland Burris II was hired by the Illinois Housing Development Authority’s Legal Department based on his qualifications in response to a published job posting,” Boykin stated. “As an employer, it is not IHDA’s practice to request financial information from applicants.” …

Burris II, 42, once worked at the same law firm as his father: Burris, Wright, Slaughter & Tom. That firm merged with another in the fall.

The fact that Burris II faces foreclosure but is working at a housing-related state agency “reeks of hypocrisy,” said state Rep. Jim Durkin (R-Western Springs), who was the first to call on Sen. Burris to testify before the impeachment panel.

So does Chicago have any honest politicians?