Raising the Flag on Iwo Jima
This historic picture below was taken on Iwo Jima, February 23, 1945, by Joe Rosenthal. It depicts five United States Marines and a U.S. Navy corpsman raising the flag of the United States atop Mount Suribachi during the Battle of Iwo Jima in World War II. 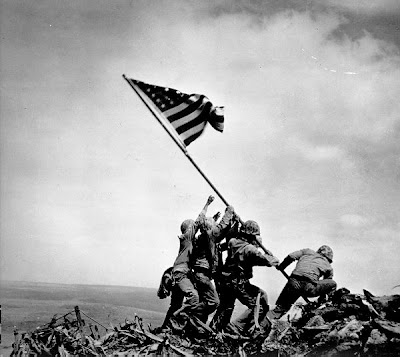 Later, it became the only photograph to win the Pulitzer Prize for Photography in the same year as its publication, and came to be regarded in the United States as one of the most significant and recognizable images of the war, and possibly the most reproduced photograph of all time- Wiki.

In a day and age where the media and democratic politicians attack, ignore and slander the military, this photo is a good reminder of the many heroes who have served this great nation over the past 232 years.
Hat Tip Terry Harris