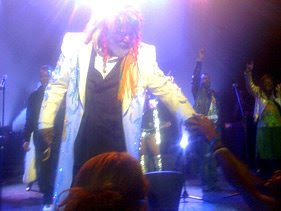 George Clinton reaches out to a crowdmember during the Heroes Red, White and Blue Military Ball. (MTV)

Several wounded vets walked out of their ball on Tuesday night after a band member from the George Clinton and the P. Funk All-Stars waved a white flag with “F*** George” written on it.
The All-Stars decided to do the show after Jamie Foxx, Nas, Josh Groban and Tiki Barber pulled out last minute, putting ball sponsors USO, TAPS and Citizens Helping Heroes in a difficult position.
The Washington Times reported:

An inaugural ball honoring U.S. military veterans ended in a kerfluffle as several veterans walked out when a musical act’s attempt at humor backfired.

During the Heroes Red, White & Blue Inaugural Ball honoring the nation’s veterans, a vocalist with George Clinton and the P. Funk All-Stars held up a white towel with large block letters saying “[Expletive] GEORGE,” perturbing many audience members who walked out after the display, interpreting it as a jab at the outgoing commander-in-chief, George W. Bush.

A spokeswoman for the ball’s organizers said the sign was inappropriate.

“Obviously we and the Heroes Ball coordinators were unaware that the sign existed and did not support their actions, especially considering our non-partisan mission and treasured military audience,” said ball spokeswoman Carrie Foster.

But a spokesman for the band, the final act to perform, said the sign was intended to poke fun at their leader, who shares the same first name as Bush.

“George’s guys always have always had a thing about the four-letter-word,” said band spokesman Sandy Friedman. “It was directed to George Clinton. There was no last name, it was to George, the leader of the band.”

…One fellow band member seemed to notice people walking out and quickly ripped the sign down.

The audience at the Warner Theater in downtown D.C. included wounded young veterans wearing slings, walking with canes and nursing other visible wounds. Some 300 military service men and women from Walter Reed Hospital and their families were invited.

It’s hard to say what was more insulting… Having antiwar Speaker Pelosi, who regularly attacked the president and declared the war was lost, come visit, or, having the band wave white flags with “f*** George” written on them.