At this rate we’ll be into 7,000 point territory by closing.
Super.

It’s been nothing but a disaster since he took over. 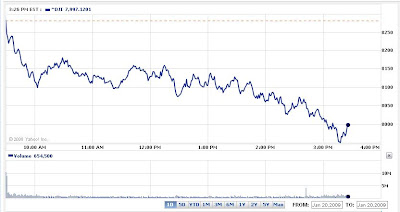 US stocks were on course on Tuesday for their worst inauguration day performance since the assassination of John F Kennedy, led by more heavy losses among banks.

Actually it was the worst inaugural day since 1933.