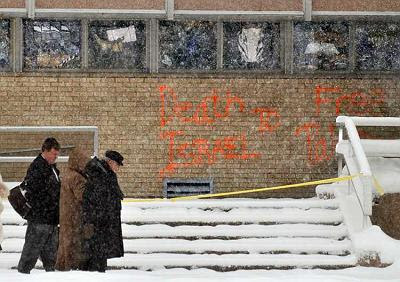 Two North Side synagogues and one in Lincolnwood were vandalized early Saturday. (Scott Stewart/Sun-Times)

The vandals were caught on tape spray-painting the buildings at 4 in the morning.
The Chicago Sun-Times reported:

Vandals spray-painted the words “Death to Israel’’ on two synagogues and a Jewish school early Saturday in three separate incidents police say could be linked and are being investigated as hate crimes.

In each case, the vandals — at times donning masks — used orange-colored paint, also shattering glass windows with bricks and rocks at two of the buildings.

A witness and security cameras identified the perpetrators as two men.

Moshe Perlstein, rabbi at Lubavitch Mesivta of Chicago, said cameras captured video of the men damaging his rabbinical school at 2756 W. Morse starting at around 4:40 a.m. The footage shows one man spray-painting the side of the building while the other ran around to the front and threw rocks at the front door, breaking a glass window, he said. The video has been turned over to police.

Lincolnwood police said vandals also scrawled “Death to Israel’’ and “Free Palestine’’ on the outside walls of Lincolnwood Jewish Congregation, 7117 N. Crawford. Mitchell Sandler, past president of the congregation, said they threw at least two bricks at the front doors, damaging four windows.