Before he left office President George W. Bush made sure to honor Ambassador Ryan Clark Crocker for his outstanding service to his country.
Crocker is the top US diplomat who delivered Iraq from chaos to democracy. 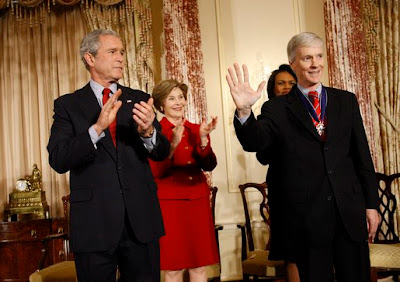 The President awarded a Medal of Freedom to Ambassador Ryan Crocker on Thursday.
The White House reported:

Members of the Foreign Service bring valor and professionalism to their work every single day. And there is one man who embodies these qualities above all: Ambassador Ryan Crocker. Over the years, Ryan has earned many honors, including the Presidential Meritorious Service Award and the rank of Career Ambassador. Today I have the privilege of honoring Ambassador Crocker with the highest civil award I can bestow — the Presidential Medal of Freedom. (Applause.) It has not been bestowed yet. (Laughter.)

The son of an Air Force officer, Ryan Crocker has never been your typical diplomat. For social engagements, he likes to tell guests, “no socks required.” (Laughter.) For language training, he once spent time herding sheep with a desert tribe in Jordan. For sport, he has jogged through war zones, and run marathons on four continents. And for assignments, his preference has always been anywhere but Washington. (Laughter.)

During his nearly four decades in the Foreign Service, Ryan Crocker has become known as America’s Lawrence of Arabia. His career has taken him to every corner of the Middle East. His understanding of the region is unmatched. His exploits are legendary. He has served as ambassador to five countries. He has repeatedly taken on the most challenging assignments.

The man has never run from danger. As a young officer during the late 1970s, Ryan catalogued Saddam Hussein’s murderous rise to power. In 1983, he survived the terrorist attack on the American embassy in Lebanon. In 1998, as the Ambassador to Syria, he witnessed an angry mob plunder his residence.

After any one of these brushes with danger, most people would have lost their appetite for adventure — not Ryan Crocker. In the years since September the 11th, 2001, I have asked Ryan to hold numerous posts on the front lines of the war on terror, and he has stepped forward enthusiastically every time.

When the American embassy in Kabul reopened in the beginning of 2002, Ryan Crocker was our first envoy. When we liberated Iraq and removed the thug Saddam Hussein from power in 2003, I sent Ryan to help lead the reconstruction efforts. When the American embassy in Pakistan needed new leadership, Ryan Crocker was put in charge. In 2007, I asked Ryan to return for a final mission to Iraq as America’s ambassador.

Two years later, Iraq is becoming a rising democracy, an ally in the war on terror, an inspiring model of freedom for people across the Middle East. When the story of this transformation is written, historians will note the extraordinary partnership between two exceptional men: General David Petraeus and Ambassador Ryan Crocker. As the General carried out a surge of military forces to improve security, the Ambassador led a civilian surge to improve everyday life. In December, after months of intense negotiations, the world saw the culmination of Ambassador Crocker’s masterful diplomacy — two historic agreements for long-term cooperation between the United States and Iraq.

This is not the first time that Ambassador Crocker has executed a brilliant diplomatic maneuver in Baghdad. During a rotation at the American embassy nearly 30 years ago, he persuaded a young Foreign Service Officer named Christine Barnes to be his wife. (Laughter.) They have traveled the world together, and as Ryan prepares to retire from the Foreign Service, we wish the two of them many years of happiness. (Applause.)

General Petraeus recently said this about his retiring colleague: “It was a great honor for me to be his military wingman.” And today it is my great honor to present the Presidential Medal of Freedom to one of the finest Foreign Service Officers in American history — Ryan Clark Crocker. And now the military aide will read the citation. (Applause.) 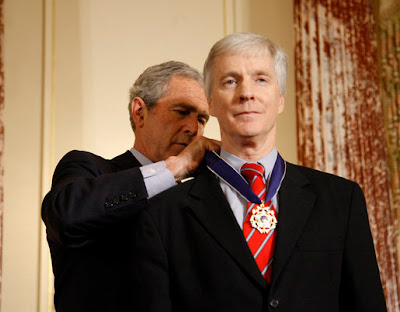 David Ignatius at The Washington Post wrote about the career of Ambassador Crocker today. It is an excellent article on this admirable public servant.