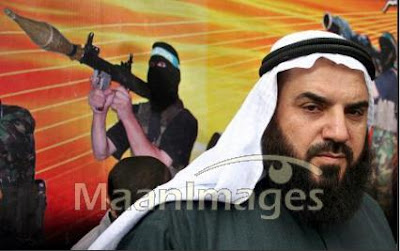 The Hamas leaders Hussam Hamdan and Muhammad Hilo joined Hamas leader Sheik Nizar Rayan who was killed in an airstrike along with 2 of his 4 wives on Thursday. Rayan’s surviving daughter told Maan News that, “My father raised us all to love martyrdom.”
What a good father.

Hussam Hamdan, one of the two terrorist commanders killed in the strike, was in charge of launching the recent Grad-type Katyusha rocket attacks on the Negev cities of Be’er Sheva and Ofakim.

The second terrorist, Muhammad Hilo, was head of the Hamas Special Forces in Khan Yunis.

No rockets have struck Be’er Sheva or Ofakim since ground troops entered Gaza on Saturday night in phase two of Operation Cast Lead.

The IDF has killed some 50 terrorists, according to local sources in Gaza, as well as an undetermined number of civilians who were unavoidably caught in the crossfire. IDF troops are reportedly conducting house-to-house searches for wanted terrorists and smugglers’ tunnels, and fighting is reported to be heavy.

As of midday Sunday, 22 Israeli soldiers were hospitalized with moderate to severe injuries.

Mere Rhetoric has a map of the ground operations in Gaza.

From the IDF YouTube Channel here is video of the young Israeli soldiers preparing to enter Gaza:

Israellycool and The Muqata have roundups on the crisis.