Thousands turned out in Paris to show their support for Israel today. 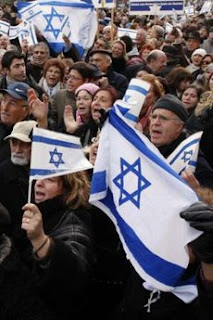 Demonstrators wave Israeli flags and chant pro-Israeli slogans during a gathering near the Israeli embassy in Paris January 4, 2009. (REUTERS/Benoit Tessier)

Several thousand demonstrators waved Israeli flags and sang Hebrew hymns in Paris Sunday to show support for Israel in its military offensive in Gaza, a day after a huge pro-Palestinian rally.

Warmly dressed to brave seasonably cold weather, about 12,000 demonstrators gathered on a street not far from the Israeli embassy, according to organizers, the CRIF, an umbrella group of French Jewish organizations.

Police said 4,000 people turned up for the demonstration held on a side street after city authorities barred them from massing directly in front of the embassy.

Saturday, more than 20,000 people marched to show support for Palestinians in the Gaza Strip and to condemn Israel’s offensive aimed at halting rocket attacks from the Hamas-controlled territory.

“Israel is simply fighting for its freedom and for the survival of its people,” France’s Chief Rabbi Gilles Bernheim told the crowd. “There is no desire to destroy another people.”

Bernheim said it was important for French Jews and Muslims to “maintain a relationship of trust” and expressed concern for the fate of French-Israeli soldier Gilad Shalit, captured in 2006 by Palestinian militants in Gaza.

France is home to Europe’s biggest Jewish and Muslim communities and Middle East violence has in the past stoked tensions in ethnically-mixed neighborhoods.

Unlike the pro-Hamas rally the day before, no cars were torched after the pro-Israel protest. 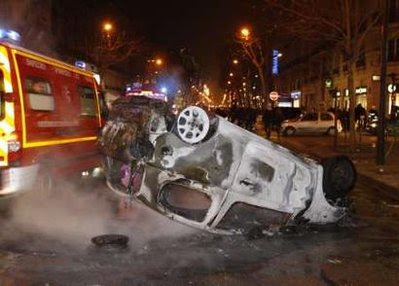 An overturned vehicle is seen during a demonstration against the Israeli air strikes on Gaza, in Paris January 3, 2009. (Reuters)