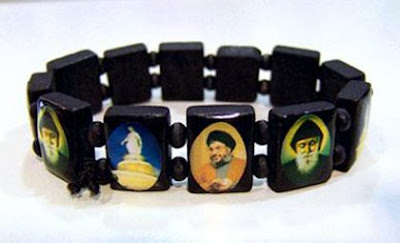 Terrorist leader Hassan Nasrallah has made his way onto Christian bracelets and rosaries. His supporters say that he is thought of as a saint.

For some strange reason, Christians are upset that Hezbollah leader Nasrallah is appearing on rosaries and trinkets next to Mary and the saints.
Now Lebanon reported:

A picture of Sayyed Hassan Nasrallah is not unusual in Lebanon. The Hezbollah leader, adored by party supporters and admired by many others, is depicted everywhere from posters to cigarette lighters. But circulating online are images of Nasrallah’s face on a bracelet of pictures of Christian saints, and of Nasrallah on a rosary. To some, the sight of a living Muslim militia leader has no place in Christian iconography.

Controversy has been further stoked by scenes from a Hezbollah promotional video, in which a choir is singing a pro-Hezbollah song in a church. Reports suggest that the church is Mar Youssef in the Hezbollah stronghold of Haret Hreik in southern Beirut, but many have been outraged nonetheless, and the video was posted on the website of the Lebanese Forces Christian political party to widespread condemnation.

The outcry by some Christians pushed the party into answering questions about the controversial religious items. Hussein Rahhal, the party’s media relations chief, spoke on Sunday on Free Lebanon Radio, saying that Hezbollah did not make the rosary or bracelet, and that the people behind them were likely Christian. Citing Article 9 of the Lebanese constitution, which calls, he said, for freedom of religious expression, Rahhal claimed that many Christians and others thought of Nasrallah as a saint. He declared that it was not his responsibility to tell them otherwise, rather saying that the mix of Christian with Hezbollah imagery was a “good sign of co-existence and love.”

ANSA reported that a video was also recently published on the internet showing a choir of young people praise the Shiite movement under the roof of a Christian church in Beirut.