Islam in Europe blog posted this video of a horrible scene at a protest in Oslo this weekend.

The pro-Hamas supporters splattered their children with fake blood and lined them up in front between them and the police. Then they attacked the police with fireworks and flying objects:

Oslo politicians were angry that pro-Hamas demonstrators used children as “human shields” in the anti-Israel demonstration this past Saturday. The demonstration degenerated into riots, with the children in the front lines… crying.

Neocon Express has more on the abused child protesters.

It was a violence-filled weekend in Oslo… 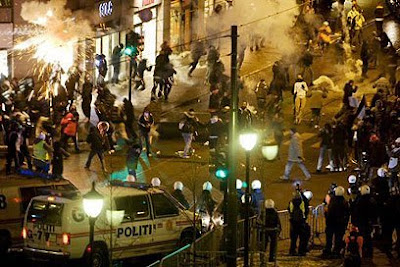 The pro-Hamas supporters in Oslo came to the rally with knives, bats and Molotov cocktails this weekend. Shop windows in the city centre were shattered and police repeatedly used teargas to break up groups of the activists.