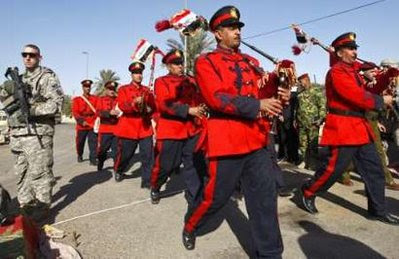 A U.S. soldier stands guard as Iraqi military band marches past during the handover ceremony of the Green Zone in Baghdad January 1, 2009. U.S. forces came under an Iraqi mandate on Thursday for the first time since the 2003 invasion of Iraq, and handed control of the Green Zone in central Baghdad to Iraqi troops in a symbol of the dramatic change. (REUTERS/Thaier al-Sudani)

The US turned over control of the Green Zone to Iraq today in what is being called a restoration of Iraq’s sovereignty.
The AP reported:

The United States handed over control of the Green Zone and Saddam Hussein’s presidential palace to Iraqi authorities on Thursday in a ceremonial move described by the country’s prime minister as a restoration of Iraq’s sovereignty.

At a ceremony marking the transition, Nouri al-Maliki said he will propose Jan. 1 be declared a national holiday to commemorate what he called “Sovereignty Day” — the day Iraq took the lead in security away from U.S. forces, regained control of its airspace and reclaimed a wide swath of Baghdad’s heavily fortified Green Zone. Iraq already marks New Year’s Day as a holiday.

The area that became known as the Green Zone on the west bank of the Tigris River was occupied by the United States shortly after the 2003 U.S. invasion and walled off from the rest of the city.

Until Wednesday, Saddam’s former palace formally served as the U.S. Embassy and headquarters of the U.S military in Iraq. Thursday’s palace handover was mostly ceremonial, as most U.S. diplomats and military officials long since moved to a new embassy building on the other side of the Green Zone, which is also known as the International Zone. 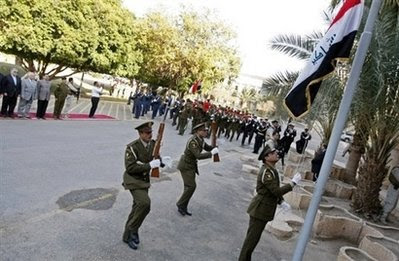 Members of the Iraqi National Forces raise their national flag outside the former palace of ousted dictator Saddam Hussein inside the Green Zone in Baghdad, January 1. The United States handed over security control of the Green Zone, a potent symbol of the American occupation, to Iraq on Thursday as a UN mandate for foreign troops ran out and bilateral military accords took effect. (AFP/Ahmad al-Rubaye)