The San Francisco Holocaust Memorial was vandalized yesterday for the third time in recent months.
Vandals spraypainted in red, “Israel there is blood on your hands,” on the memorial. 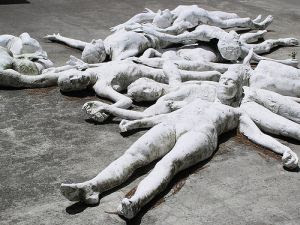 The vandal also spraypainted red on the hands of the figures.
Marooned in Marin reported, via LGF.

Witnesses say they saw a man on Monday spraying red paint on the memorial, located near the city’s scenic Legion of Honor museum.

Police say the tagger wore a white bandanna, carried a black messenger bag and fled in a car waiting nearby. Police did not describe the content of the graffiti, which city officials said was removed Tuesday.

This is the second time sinc November that the memorial has been vandalized. 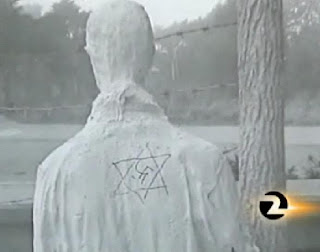 In November vandals drew swastikas on the figures in the memorial.

KTVU says police have surveillance video of the hooligan committing the crime.