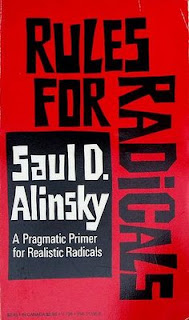 Barack Obama was hired by an Alinsky protege back when he worked as a community organizer.

To make the argument about me instead of his plan makes sense from his perspective. Obama’s plan would buy votes for the Democrat Party, in the same way FDR’s New Deal established majority power for 50 years of Democrat rule, and it would also simultaneously seriously damage any hope of future tax cuts. It would allow a majority of American voters to guarantee no taxes for themselves going forward. It would burden the private sector and put the public sector in permanent and firm control of the economy. Put simply, I believe his stimulus is aimed at re-establishing “eternal” power for the Democrat Party rather than stimulating the economy because anyone with a brain knows this is NOT how you stimulate the economy. If I can be made to serve as a distraction, then there is that much less time debating the merits of this TRILLION dollar debacle.

…If I can be made to serve as a distraction, then there is that much less time debating the merits of the trillion dollar debacle.

One more thing, Byron. Your publication and website have documented Obama’s ties to the teachings of Saul Alinksy while he was community organizing in Chicago. Here is Rule 13 of Alinksy’s Rules for Radicals:

“Pick the target, freeze it, personalize it, and polarize it.”

Rule 13 also worked well for democrats in dealing with Sarah Palin this past year.

Beyond the absurdity of a Democrat barking orders at his political opposition, he’s especially foolish to air his fear of Limbaugh and talk radio in a public setting. Now, what was long suspected by conservatives has been verified by the man himself.

The timing was no coincidence: after a rocky first week in office, the Obamists are also faced with a resurgent Fox News Channel, where ratings have been climbing since the moment he took office.

And after a wildly successful fall ratings survey, talk radio is looking forward to record numbers with the installation of the Obamists.

No wonder the Barack is singling out Rush Limbaugh and Sean Hannity.

UPDATE: Melanie Phillips has more on Obama’s Alinsky tactics at The Spectator today:

But as I pointed out here, such use of community organisation also follows to the letter the template for social revolution laid down by Saul Alinsky, the Marxist ideologue and activist who set out in his book Rules for Radicals how capitalism would be overthrown by the mobilisation of the masses and the whipping up of their discontent. The strategy revolved around creating apparently moderate local organisations that would be manipulated by community organisers — effectively deniable political agitators — to foment grievance and dissent. Alinsky’s thinking permeates ACORN and other community groups that in the past were associated with or funded by Obama, and which push an agenda that is as coercive and corrupt as it is seditious. America’s First Community Organiser promised ACORN during his campaign that within his first 100 days in office he would invite them in to discuss how they could help him change America.

It has started already.