Rep. Roscoe Bartlett, R-Md.: “Mr. President, I probably come at this from a slightly different perspective. I remember when FDR beat Hoover in 1932. So I remember the Great Depression very well. I don’t remember any of the many government programs affecting the course of the Depression. Government programs didn’t work then, I don’t know why we think they would work now. Mr. President, I think our obsessive borrowing has fully mortgaged my kids and my grandkids. Now we’re working on mortgaging my two great-grandkids. Mr. President, I think it’s more than a little bit selfish to try to solve our economic problems which we created by burdening future generations yet to be born.” *

The Congressional Budget Office has released an analysis of the House version of the stimulus bill (H.R. 1) and reported that less than 21% of the bailout will be spent this year: 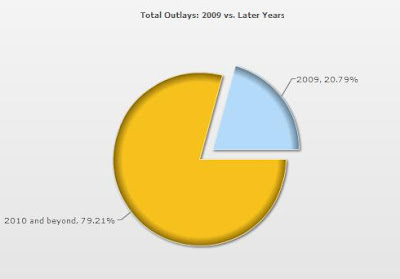 Read the Stimulus has more on this massive boondoggle.

Republicans who attended the sessions said the president did not agree to any specific changes.