Thank goodness we all survived the madness.
Bush’s ‘War’ On Terror Comes to a Sudden End 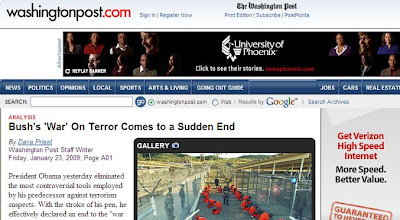 This article totally confirms what we’ve all been thinking.
The Left (including the media) believe this was Bush’s war.

There was no threat.
It was our fault. If we change and be nice they will change and be nice.
It’s not a battle against Islamofascism. That’s a madeup Bush term.
Barack Obama will lead us to a valley of honeysuckle and rainbows.

Keep this article in mind on how the Obama Administration is stripping our country of the tools to keep us safe:

Key components of the secret structure developed under Bush are being swept away: The military’s Guantanamo Bay, Cuba, facility, where the rights of habeas corpus and due process had been denied detainees, will close, and the CIA is now prohibited from maintaining its own overseas prisons. And in a broad swipe at the Bush administration’s lawyers, Obama nullified every legal order and opinion on interrogations issued by any lawyer in the executive branch after Sept. 11, 2001.

It was a swift and sudden end to an era that was slowly drawing to a close anyway, as public sentiment grew against perceived abuses of government power.

It only took 3 days.