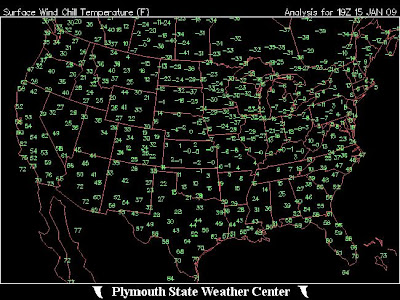 Arctic sea ice growth finished the year in 2008 at the same level as 1979.
The oceans have been cooling since 2003.
Sea ice is growing at the fastest pace on record.
A rare 50 year arctic blast is cooling the west coast.
There are growing fears of a coming freeze worse than the ice age.
Alaskan Sea Glaciers are advancing for the first time in 250 years.
And, for the second straight year the Earth is, in fact, cooling… not warming.

This US Climate Map October 2007-November 2008 shows that temperatures are well below normal throughout the US this year.

It looks like Al Gore is a bit off on his prediction that North Pole will be completely gone in 5 years.

But… That won’t stop House Democrats from pushing ahead with their global warming cap and trade legislation.
House committee leader Henry Waxman (D-CA) is wasting no time pushing legislation to give government more control over energy and business.
Breitbart reported:

The chairman of a key House committee said Thursday he will move “quickly and decisively” to push legislation curbing greenhouse gases with a goal of passing climate legislation out of his committee before Memorial Day.

Rep. Henry Waxman, D-Calif., opening the new Congress’ first hearing on the threats from global warming, said inaction on the climate issue is causing uncertainties that make it more difficult to emerge from the recession.

“Our environment and our economy depend on congressional action to confront the threat of climate change and secure our energy independence,” said Waxman. “U.S. industries want to invest in a clean energy future, but uncertainties about whether, when and how greenhouse gas emissions will be reduced is deterring these vital investments.”

What total BS.
The loons are going to gunk up business so bad this recession may last until 2030 right along with their new emission limits.