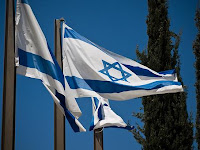 (Flickr)
Jim- I met you at the Israel solidarity rally last night (1/8/09) at the JCC in St. Louis. I counter-protested the Pro-Gaza protest in downtown Clayton with some friends this week. The Instead of War Coalition is having a Pro-Gaza rally and march in front of the University City City Hall and are also marching through the Delmar Loop tomorrow Saturday (1/10/09) from noon to 2 pm. I have started to organize a counter-protest to support Israel at the same time and location as the Pro-Gaza rally, so tomorrow Saturday (1/10/09) from noon-2 pm. If you could advertise our Pro-Israel counter protest on your blog, Gateway Pundit, that would be great. Hope to see you there!

I hope that some of you reading this will be able to make it.

Related… 40,000 people in Norway protested Israel yesterday.
You can leave a comment at the Hamas-supporting website here.